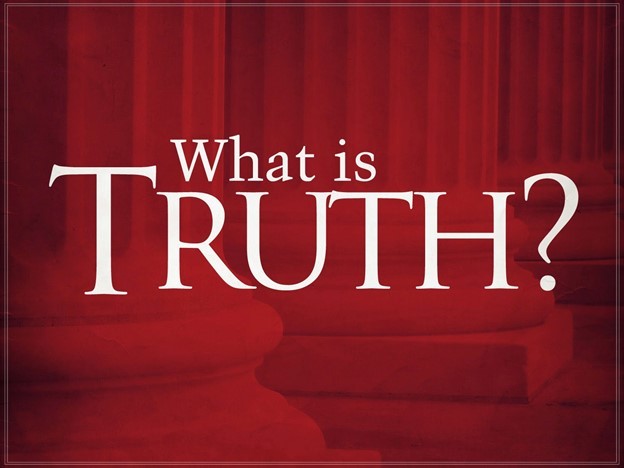 "Rather than love, than money, than fame, give me truth." –THOREAU

"And ye shall know the truth, and the truth shall make you free." – JESUS

"I do (swear in the name of God/solemnly affirm) that what I shall state shall be the truth, the whole truth… - WHAT OUR JUSTICE SYSTEM REQUIRES

WOW! This thing called "truth" must be really important. But, where do you get it?

"It's only in the eye of the beholder that such a nebulous thing as "truth" has any real meaning." – THE FREE DICTIONARY

Recently the concept of "truth" really got shaken when Rudy Giuliani stated that "truth isn't truth," and Kellyanne Conway, an advisor to the President presented the public with what she called "alternative facts" to the truth.

My father was involved in a big lie when he was working in Hollywood for the movie industry. It was a lie sponsored by the U.S. Government and was called propaganda.

I was surprised to see this sentence in Stanford University Research Paper by Sahil Khanna titled WORLD WAR II AND PROPAGANDA - "One of the main reasons why World War II had a huge impact on the world was from propaganda; because it promoted a great deal of industry and economic stability."

So apparently, not telling the truth can be beneficial. Here is some additional material from that paper –

"There was a more subtle fight being fought by the Axis and Allied government's moviemakers and poster designers.  These men and women played an important role in drawing up certain beliefs about their enemies and the war by spreading these types of thoughts to their fellow citizens to bring some type of unity for their nation.  These psychological soldiers tried to promote a love for their country through the power of propaganda.

Propaganda is defined as, "ideas, facts, or allegations spread deliberately to further one's cause or to damage an opposing cause" (Merriam-Webster Dictionary).  During World War II, Propaganda was a driving force that kept the battles heated and each nation's population united for a common cause.  When we look back at World War II and the times we were in, how effective was propaganda though? How was it represented, and what images would persuade the people of each country to fight in the war?  Both countries, Germany and the United States, created vast promotions during the war that were degrading to their opposing sides.  A great sense of nationalism was building up and these propagandists did anything to keep their country on top no matter how degrading and deceiving we could possibly be.  They stereotyped and lied about their opponents just to heighten patriotism through posters and film, and the images used in these types of propaganda by both governments took every flaw of our enemies and blew them out of proportion.  While the United States promoted production and Germany uplifted xenophobic thoughts, both countries created a sense of nationalism and brought their countries together under fraudulent thoughts of their enemies."

Did you ever think "not telling the truth" had to be taught? My research led me to this –   "The truth comes naturally," says psychologist Bruno Verschuere, "but lying takes effort and a sharp, flexible mind." Lying is a part of the developmental process, like walking and talking. Children learn to lie between ages two and five, and lie the most when they are testing their independence."

I'm not going into the many things that impact millennials and the truth, such as bots and internet trolls. But, instead provide the self-reflection of millennial Matthew Jones in an August 8, 2017, INC. NEWSLETTER article –

"If one thing is abundantly clear, it's that we live in a world full of hypocrisy and suffering. The garbage being consumed doesn't lead people closer to truths. It blinds them to the incongruence between their values and their actions.

Instead of being a sheep, start being a shepherd. Be humble, open to feedback, and focused on leading by example. Doing so will help you discover the truth and live a more honest and fulfilling life."

Talking about the TRUTH, I find the concept goes along with TRUST. Just as I was about to complete this post, a news bulletin popped up on my screen – "Once hailed as a Wall Street icon, the ex-Nasdaq chairman had bilked investors out of an estimated $65 billion at the time of his 2008 arrest. Bernie Madoff has passed away." Now here was a man who had his form of truth that was believed by victims ranging from famous names such as Steven Spielberg, actors Kevin Bacon and Kyra Sedgwick, New York Mets owners Fred Wilpon and Saul Katz and L'Oreal heiress Liliane Bettencourt to small-time investors who invested their pensions and life savings. In reading more about him, I think he actually believed much of what he said. He had trust in himself. How many of us have, to hopefully a much lesser degree, the same malady?

Then there is the "little white lie" or the stretching of the truth. "You look beautiful today." "That was a great thought." The telling of a seemingly small, insignificant, or harmless lie in order not to offend someone seems reasonable.

It seems to me that "truth" only works in conjunction with "trust."

In my upcoming novel SKYWARD "truth" and "trust" are essential. Without them, the colonist cannot survive. One of the reasons they went to the Moon was to get away from the expanding "non-truths" on Earth.