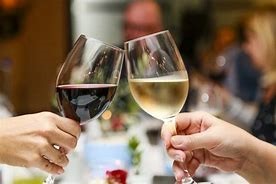 We are approaching Memorial Day, so I selected a patriotic theme for today's post – Red, White, and Rosé. Well, it's close to being patriotic.

Actually, yesterday was a national day of celebration. Hopefully, you didn't miss that it was National Wine Day. If you somehow missed out, don't worry. You can join me in personally making every day a wine day.

In researching this day of celebration, I found out there is also a National DRINK Wine Day on February 18th. I'm not sure what the difference is between these two days. I suggest that we petition whoever you petition for these things to make one or both of them National Holidays. Then we could really celebrate without the worry of possible adverse side effects.

National Wine Day – is an annual American holiday celebrated on May 25th, the day after my birthday. The purpose of this day is to buy wine, appreciate wine and enjoy the history of wine. I suspect there is a strong wine lobby. Particularly when the press release starts out with the day is "to buy wine."

Like many before me, I do enjoy a glass or two of wine. After all, this alcoholic beverage has been a part of human civilization for at least 8,000 years, so it must be good.

They found a winery that produced wine in 4300 BC. This winery was in the Areni cave in Vayouts Dzor in Armenia. Archaeologists call it a winery because they discovered cups and jars for holding wine and other equipment such as wine presses and fermentation vats used in the production of wine. I suppose that's enough evidence for you to call it a winery. There were also the seeds and vines of Vitis vinifera located on-site. Before this site was discovered, the oldest known winemaking could only be traced back to about 3100 BC – or about 900 years later than this find – in an Egyptian tomb.

In my upcoming novel SKYWARD, the Bowman colony on the moon constructs a special building to raise wine grapes and convert them to wine. So I expand the wine tradition to space.

Here are some fun facts I discovered about wine –

1.    The antioxidants in red wine are believed to have many health benefits. So, I think health plans should give a premium credit for drinking red wine.

2.    But, wine only has 1/10th of the antioxidants of soy sauce. This suggests to me that you should have Chinese food with it.

3.    Wine has no fat and no cholesterol, so you can indulge in a glass or two guilt-free!

5.    The states of California, Florida, and New York lead the U.S in wine consumption. Note my State of California is listed first. I have personally done my best to ensure we stay number one.

6.    In the United States, California leads the wine production business with over 800 wineries in the state.

7.    Wine has been produced in southwestern France since Roman times. I have had the opportunity to check this out. I can personally confirm France has excellent wines. But, my favorite red wine is Brunello di Montalcino, which I discovered on a wine tour in Italy. For a while, I had it shipped directly from Italy. The first shipment surprised me as it was sent as medical supplies. Seems appropriate.

8.    The Romans mixed lead with wine to help preserve it and give it a sweeter taste – No wonder Rome fell! This is a CDC no, no.

9.    Ice wine (known as Eiswein), made of frozen grapes, was invented by the Germans. Having a German background, I had to try this. Ice wine is a type of dessert wine produced from grapes that have been frozen while still on the vine. The sugars and other dissolved solids do not freeze, but the water does, allowing more concentrated grape juice to develop. The grapes' must is then pressed from the frozen grapes, resulting in a smaller amount of more concentrated, very sweet wine. A little bit after dinner is great.

10.  German visionary and 16th-century church reformer Martin Luther had some thoughts on wine, "Beer is man-made, but wine comes from God." The German people seem to agree as they consume 541,552,707 gallons of wine each year.

11.  German's also like their sparkling wine. They produce a German sparkling wine — better known as Sekt. After France and Italy, Germany is the third-biggest producer of sparkling wine in the world. What happened to California?

12.  More wine grapes are planted than any other crop in the world – Good to know!

14.  Global warming may change where wine can be grown in the future – I don't like the sound of this!

15.  Wine glasses should always be held by the stem. If you hold it by the cup, the wine temperature will rise.

16.  Wine should always be stored lying down so the cork doesn't dry out and fall into the wine.

17.  When eating, red wine is usually paired with red meat and white wine with chicken and fish.
18.  The "swirl" that some people do while drinking wine is meant to release its aromas.

This evening I'm headed down the street to the Urban Press Winery for some pizza and red wine.