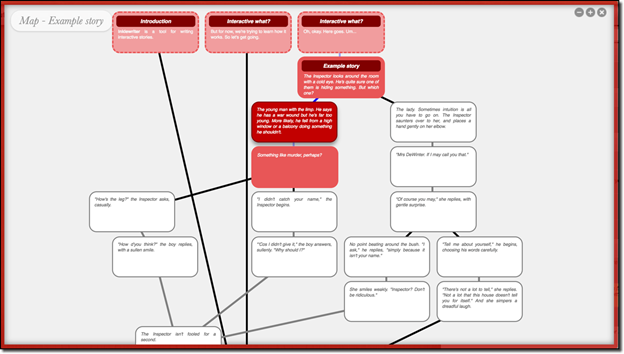 Boy, am I behind the times. I thought I just had to worry about what I had learned in screenwriting artificial intelligence writing workshops I had taken. That computers were going to take over the writing of screenplays. Now, I need to brush up on a new narrative technique that I didn't know existed.

A couple of days ago, I took a University survey to be completed by writers. Based on the questions asked, I interpreted the survey's objective was to determine the interest in authors developing interactive stories. These would be electronic stories where the reader could select from different endings or determine a character's backstory by clicking on their name, or the reader could rewrite a section of the story.

After completing the survey, I Googled Interactive Stories. I found hundreds already exist, and they are being used in school classrooms. Who knew?

One site had dozens of them posted and indicated -

"Interactive Stories are "choose your own ending" stories started by an Author and continued by anyone  that wishes to participate. At the end of each chapter, readers are given a few plot choices and must choose the direction of the story. When you come to the end of a storyline, it's your turn to add a chapter!"

Next, I found slides from a workshop titled "What is An Interactive Narrative? – Here's the text from slide 8  –

-       Has an authored core story – This could be a mobile app, a print book, a web site. Or nothing more than a sheet of paper with a Central Dramatic Question, story arc, plot, and character sketches.

-       Has a social narrative – The lives of the characters expand into a shared social space where the audience can learn more and become more engaged with the story.

-       Integrates and encourages audience participation – The plot moves outside of the core story and utilizes a social dialogue to engage readers with the story and its outcome.

I was tempted to try this out for my FBI Special Agent Hartmann Series. It only took a couple of minutes of thinking to remember my multi-media technical skills are nonexistent.  I'd better stick to my initial plan for the series. That at least has some chance of getting accomplished.

Lastly, I did have a conversation with my son Brian about the interactive story concept. He works in the movie industry, and apparently, this idea is being explored by the industry. We arrived at no particular conclusion as to where it is going. An open item for us was the question of whether this expands the human mind or whether it is the dumbing down of American. Are good writer's literary works going to be destroyed by this concept? Or, you could suggest, it's just an expansion of the way literature is developed.

You can expect a future Rupp's Notes to be titled, "Are We Dumbing Down America."