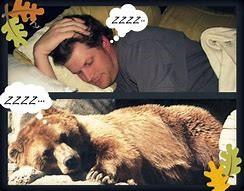 It's a good thing I like my apartment in Burbank. It's both home and my place for writing.  As Burbank is in L.A. County, I've been ordered to "stay at home" for the next three weeks. But, looking at the COVID-19 virus numbers, hibernation is probably the best thing to do. After all, it is winter. The U.S. is recording a million cases every seven days, passing 14 million total cases this week. More bad news: This week, the U.S. saw its highest number of COVID-19 deaths in a single day, not once but twice.

The crazy thing about today's announcement to "stay home" is that nine months ago, we were told to hunker down for one or two months – three, max. Now we are told the pandemic's darkest days are still ahead of us, even with the vaccine.

"Hibernation is a state of minimal activity and metabolic depression in endotherms. Hibernation is a seasonal heterothermy characterized by low body temperature, slow breathing and heart-rate, and low metabolic rate. It most commonly occurs during winter months." Well, maybe the "stay at home order" is not hibernation. I can tell by watching the news many heart-rates have raised rather than lowered. And, I don't think many of us will come out of this well-rested.

To ease my continued hibernation, I planned to watch the Gonzaga (No. 1) vs. Baylor (No. 2) college basketball game this morning, but it was canceled because of the pandemic. Instead, I got to watch news shows about the battling between states – both our states and foreign states – over how to distribute the limited supply of vaccines. Talk about the expansion of "tribalism."

Reading between the lines of a number of news stories promoting direct voting over the Electoral College, I suspect New Yorkers and Californians (of which I'm one) want to dictate their values to the rest of the Country. I will agree that the election of our countries President by popular vote seems fair. But, it actually ends up disenfranchising those who live outside of New York and California. To me, the Electoral College provides protection of States Rights. I recognize that it was not developed for this purpose, but it has provided such protection.    States' rights guarantee that each state under the principle of federalism has its own identity and sets its own social values. Under the Constitution, states have considerable autonomy to pass, enforce, and interpret their own laws and pursue their own public policy programs. Proponents of states' rights argue that the states should be governed with a minimum of interference from the federal government.

I'm happy to report Facebook and I are now copasetic. I'm no longer on their "bad boy" list. My posts can now be seen by people other than just friends/subscribers.  However, have you seen the changes to F.B? I don't like the new format, and I'm not sure what they were trying to accomplish with it other than confusion.

Back to writing. Yes, FBI Special Agent Hartmann and his crew are still in writing hibernation. The good news is that SKYWARD my latest idea for a novel, is well underway. I believe it addresses a question that needs to be answered, with the world in its state of disrepair. Hopefully, you will agree with me.

I'm well stocked on gin, tonic, and food. Also, I purchased two five-pound barbells and have developed a regular exercise routine with them.