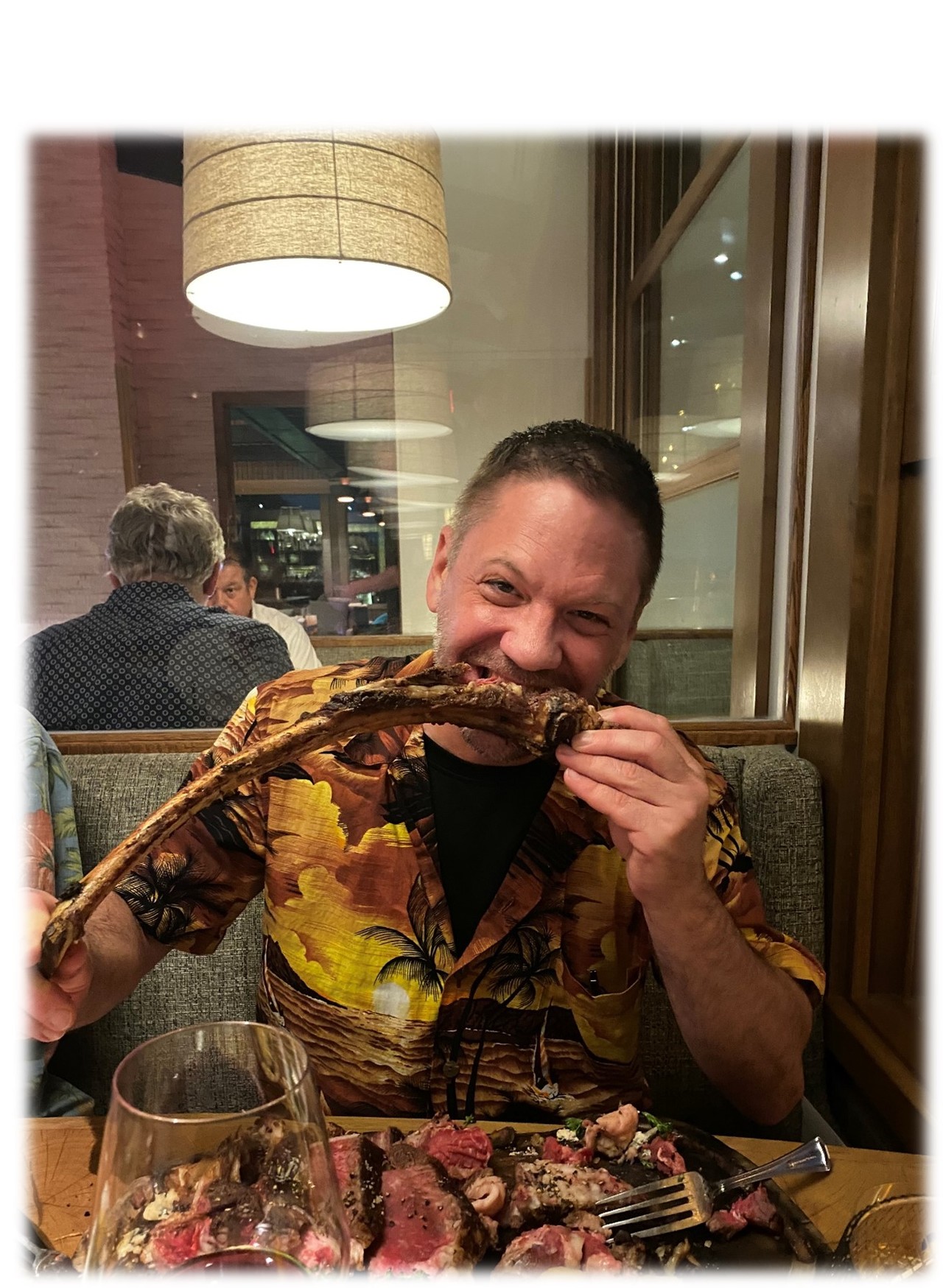 We ate well! In my last post, I mentioned that my sons Matt and Brian and my grandson Ryan were going to the Castaway Restaurant up the hill from my place to celebrate both my sons' September birthdays. The above picture is of Brian working on his dry-aged tomahawk 48oz steak. Matt had the same cut, and I settled for a much smaller New York strip steak. It was a great evening, and we had a clear view of the lights flickering in the San Fernando Valley below.

Happy fall, everyone. In my last post on September 22nd, I failed to mention the autumnal equinox, the first day of fall in the Northern Hemisphere. It's the day when Earth is perfectly angled sideways to the sun, and so day and night are of equal length. Hopefully, this is the beginning of a cooler time. It has been a long hot summer.

It seemed like fall days here in Burbank, with a darkened overcast sky. But, that was because the winds had shifted, and for several days now, we have been getting the dark smoke from the wildfires north of us. An actual fall day would be nice.

I have spoken with a number of people recently that actually have concerns about going out these days. Not because of the heat or the smoke, but because of the increased crime rate. It's not safe to drive on our freeways or eat at an outside table in Beverly Hills.

My FBI SPECIAL AGENT HARTMAN SERIES characters Special Agents Dick Hartmann and Coleen Ryan worked overtime in 2020 solving murders. According to the just-released FBI UNIFORM CRIME REPORT, 2020 had the highest single-year spike in murders since they started keeping count in 1960. Murders rose by 29 percent in 2020 compared to the previous year to an estimated 21,500 across the country. The previous largest one-year change was a 12.7 percent increase in 1968. Every region had an uptick, with Louisiana holding the record as the U.S. murder capital for the 32nd straight year.

Here in California, where Dick and Coleen are based, there were 5.8 homicides per 100,000 residents in 2020, the highest rate in the state since 2008 based on information from the California Department of Public Health.

I have read numerous articles trying to explain the reasons for the dramatic rise in murders. All I can say is that there seem to be a lot of possible contributing factors. Of course, the pandemic stresses are mentioned. There is increased tribalism created by the rising political extremes. There was a significant uptick after the May 25th killing of George Floyd. The increased distrust and defunding of law enforcement agencies have had a considerable impact. It resulted in a pullback in police response, which has been picked up by the criminal element. Due to this, there has been an increase in the sales and carrying of firearms. About 77% of murders in 2020 were committed with a firearm, the highest share on record. Both road rage and mass shootings increased.

In my first novel, DEATH & TAXES, I write about the Bulldog gang in Fresno, which literally controlled a section of the City for many years (this is true). I noticed several articles indicated that the law enforcement backlash has created "autonomous zones" in several cities. As the police pulled back, criminals had less fear of consequences, and people felt more inclined to seek street justice rather than call the police when a disagreement arose. In some "autonomous zones," the police will not even respond because they don't feel safe.

One article indicates that the murder rate is still increasing in 2021 over 2020. Both Portland, Oregon, and Las Vegas, Nevada indicate they are seeing a sizable increased relative to 2020, while Chicago and New York are seeing the same high numbers as last year. That's not good news.

On to my work in progress, SKYWARD. In my last post, I indicated the White House Press Secretary had an interesting spin on what the "Skyward Project" was about. Here's what she had to say –

"I suspect you all know my mug," said Virginia Leigh, White House Press Secretary. "You have probably figured out this Project Skyward is a big deal, and we are going to make it an even bigger deal to the world. If you think I'm making this up as I go along. I am. Next week the President will make an announcement about the Skyward Profect. He will say something to the effect that the United States has developed a working relationship with American private enterprise to establish a colony on the Moon, with the ultimate objective of exploring and habiting the Universe. The project will be coordinated by the Bowman Space Group established by Norman and Chris Bowman out of San Francisco, California. It will include participation by American entrepreneurs Jeff Smith, CEO of the Euphrates Electronic Commerce Company, and Elon Jones, CEO of the Volta Automotive Company. All of whom have been active in space research, development, and launch projects."

Virginia took a breath and then added. "What will not be said but will be implied is that we are ahead of China in space exploration. And that the U.S. Military is not involved.  . . .As things progress, we will announce that the Bowman Moon Colony has been declared a U. S. Territory and run by a Governor located in The Colony. Okay, everyone, that's pretty much it, except for introducing my assistant; there is San Francisco Darby Connor."

An excited group of five government employees, a political advisor, and four young entrepreneurs spent the next forty-five minutes getting to know each other.

Darby Connor looked at the men she was going to be working with, took a sip from the new bottle of Hennessy Cognac, then unexpectedly yawned as she said to the group, "I think I'm going to like this assignment."

Norm said, "It's getting late, and I suspect we each need to digest not only the food but, more importantly, what happened tonight. May I suggest that my brother and I host you all for a late working lunch tomorrow at the Bowman Mansion?  Say, 1 PM."

As usual, the above is subject to rewrite and professional editing by my publisher.

It's going to be another football weekend for me. Go UCLA! Go USC! Go RAMS! Go BOLTS!