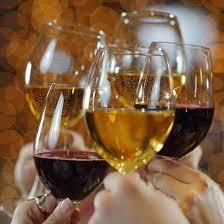 Having worked with British insurance guys and gals for years before trying my hand at writing, I learned to use the word "Cheers." I adopted it both in the salutation of correspondence and in saying goodbye after a meeting. To a Brit, it's not just a word used to celebrate.They use it to say hello, goodbye, to thank you, and no thank you to formal or informal toasts at the bar. I still use the phrase frequently. At least once an evening at my local wine bar as I raise my glass to acknowledge one or more of my friends.

Nobel laureates Faulkner, O'Neill, Hemingway, and Steinbeck drank frequently, as well as Brendan Behan, Dylan Thomas, Jean Rhys, and many more. Alcohol has played a central role in the creative lives of some of the most famous authors of the last few centuries. I'm just trying to join in. And, some say it may be good for you. Yes, I'm trying to become a great writer and, at the same time, stay healthy.

To justify my quest, I noted the following article in the Health & Science Section of 'The Week.' I am using it as my and my protagonist F.B.I. Special Agent Hartmann's justification for consuming a toddy or two, or three or more –

"Finally, something to raise a glass to - A new study suggests that drinking in moderation" (Oh shit! – Moderation?) "can be beneficial to the brain. . . The latest study followed nearly 20,000 people, either middle-aged or older, for an average of nine years, regularly testing them for mental status, word recall, and vocabulary. Compared with teetotalers, those with 'moderate' drinking habits – classified as up to eight drinks a week for women and fewer than 15 for men –" (that's one sitting for Hartmann at Le Central) "had higher cognition scores in all three areas. They also had lower rates of mental decline. The study didn't prove cause and effect. Still, the findings appear to add to research suggesting that small amounts of alcohol can have a positive effect on the brain's small blood vessels."