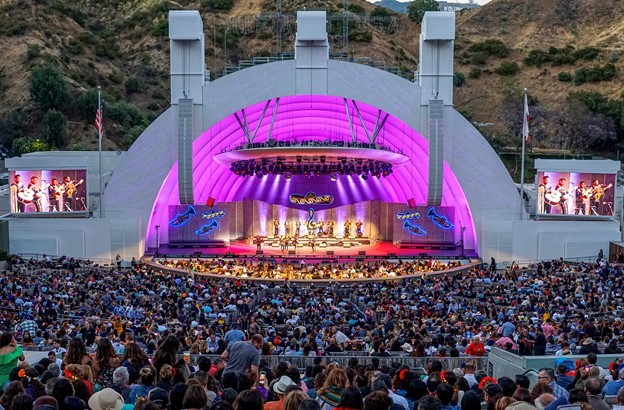 I'm still recovering this morning from too much wine last night. I enjoyed it at the Urban Press Winery while enjoying some great jazz music.

A good old times summer is coming to Hollywood. I have great memories of concerts at the Hollywood Bowl. For seven seasons starting in 1955, I was an usher there.  Over that period, I worked my way from the cheap seats at the very top of the hill down to the box seats right in front of the stage.  My job expanded from showing people where to sit to providing ice buckets to chill champagne from the supply room next to the stage. This expansive outdoor venue is a great place to spend a summer evening.  In May of last year, the Bowl announced performances were canceled for the entire season. Last year the Pandemic closed the Bowl for the first time in 98 years.

The concert I remember the most was in 1961 when Judy Garland was making a comeback. The Bowl was sold out, and mid-concert, it started raining, and in respect for Judy, not a sole left their seat. I stood at my post and watched over 17,000 people sit in their suits and gowns in a drenching rain.

With the Pandemic somewhat in check, I was happy to see the Hollywood Bowl has reopened. Apparently, when you purchase a ticket for one of the concerts, you must verify that you have been fully vaccinated at least two weeks before. Proof of vaccination must be shown at the gate. I plan to spend a few summer evenings there and then wander down for a chilled martini at Musso & Frank.

Judy Garland went to Hollywood High School, which I also attended. Of course, she was there well before my time. I was there when David and Ricky Nelson were students. David was a year ahead of me, and Ricky was a year behind. I remember them best because segments of their parents' T.V. show "The Adventures of Ozzie and Harriet" were often shot on campus. But also wandering around campus were Jil St. John, Stefanie Powers, Mike Farrell, and Sally Kellerman.

They were teenagers attending Hollywood High School.  Dozens of other Tinseltown celebrities were students there.   The school, located in the heart of Hollywood, has been known as "The High School Of The Stars," "The Most Famous High School In The World," and "The Star Hatchery."  Even the school's mascot represents an icon of the silver screen—The Sheik, as portrayed in the movie of that name by Rudolph Valentino.

Judy Turner (later known as Lana Turner) was a student there when she cut a class to run across the street for a soda and was "discovered."  That year, 1936, Mickey Rooney, Judy Garland, Nanette Fabray, Marge Champion, and Alexis Smith were all on campus simultaneously, according to the book "Hollywood High—The History of America's Most Famous Public School" by John Blumenthal.

Since the early 20th Century, the U.S. film industry has primarily been based in and around Hollywood.  Hollywood High started as a two-room school in September 1903 on the second floor of an empty storeroom at the Masonic Temple on Highland Avenue north of what now is Hollywood Boulevard.  It was the first school serving the newly incorporated municipality of Hollywood.   In 1904 the campus moved to its current site at the intersection of North Highland Avenue and West Sunset Boulevard.  A century later, on January 4, 2012, the school was listed on the National Register of Historic Places.

The coordinator for the high school's performing arts magnet school is Stormy Sacks.  Some of his students are already on the road to success in show business.   "A number of our students have gone on to perform with the Alvin Ailey Dance Company," he said.  "This year, 53 of our students sang with the Broadway cast of  'Memphis' for an audience of 6,000 at the L.A. Convention Center.

The school is the site of The Hollywood High School Museum, which highlights the school's history and famous alumni.  Located in the library building, the museum displays photos and memorabilia of notable alumni, including those in show business, sports, politics, science, the arts, military, and philanthropic sectors.

One large wall in the museum is adorned with a striking array of photos of the stars when they were students at the high school alongside pictures of them from movies, television shows, and stage productions that brought them fame.

Among them is Mike Farrell from the graduating class of 1956 and a framed copy of the script from the movie "Mash" on which he wrote "Peace, Mike Farrell."  Carol Burnett's picture from the class of 1951 is beside a photo of her as a star, which she signed "To Hollywood High with gratitude and pride.  Love, Carol Burnett."  Other sets of before and after pictures include Judy Garland, Lana Turner, John Ritter, Stefanie Powers, Gloria Graham, Jason Robards, Sally Kellerman, Linda Evans, Nannette Fabray…

And, then there was crime novel writer – Richard V. Rupp