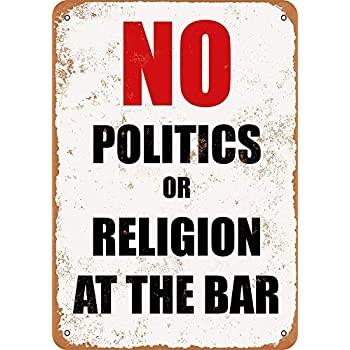 With the upcoming election, I remembered an old saying – When in a bar, don't bring up the subjects of politics or religion. Apparently, it's a rule of etiquette that goes back to 1840. . . in business, at the dinner table, at the barbershop, and elsewhere never talk about religion or politics. With the pandemic, distancing and masks, not something you really need to worry about.

The saying was repopularized in 1961 by the Peanuts comic strip. Linus said, "There are three things I have learned never to discuss with people...religion, politics, and the Great Pumpkin." This line was also pronounced by Linus in the 1966 animated television special, It's the Great Pumpkin, Charlie Brown.

In the 60s and 70s, politics was okay to discuss at the bar I frequented. This was because the Los Angeles insurance and banking business communities were pretty much Republican-oriented. From 1956 to 1988, Republican registration in California was 55% compared to 41% to 47% during those years for the Democrats.  Now it's 43% Democrats, 24% Republicans, and 27% unaffiliated. But, back in my early business days, politics did not result in any significant controversy.

In 1964 I got browny points with management when I was seen on national television with a martini in hand talking with Republican Presidential Candidate Barry Goldwater. This was during a Republican rally at the Ambassador Hotel, across the street from the HMS Bounty. Goldwater lost to Lyndon Johnson by a landslide. He won in just six states and only captured 39% of the popular vote. My bosses did not tie my meeting with him to his poor showing. The news media and smart advertising did it. Goldwater lost the '64 election because early in the campaign, he was asked by a reporter how he would end the unpopular war against North Vietnam.  He suggested using low-yield nuclear weapons to defoliate forests and destroy supply lines as part of his response. The Johnson campaign produced a campaign ad showing a little girl holding a flower with a mushroom cloud in the background with a count down as narration. The one ad was run over and over again by the media. Johnson didn't even have to pay for it. The ad is considered a propaganda classic. It's one of the reasons candidates today will limit off the cuff responses to questions about implementations of solutions to problems.

My buddies and I pretty much followed the rule as respects religion. But on one occasion at my LA watering hole, the HMS Bounty, the rule was breached. At an extended lunch in 1975, the subject of religion was discussed at length. It started out because of an article in the LA Times that day about the Church of Perfect Liberty. A religion founded in Japan that gained a worldwide membership of more than three million followers, including 4,500 in Malibu, California. Its founder Tokuchika Miki preached that living is a lot like playing golf. Its members embraced golfing as part of a religious search for self-expression. The membership pitch included a statement that new recruits to the church quickly improve their golf scores by four or five strokes. Because of its emphasis on golf—and its predilection to build fancy golf courses wherever it colonizes—it was termed the "Golf Religion."

With this as a start and a couple more rounds, we put our heads together. Remember, my buddies were executives in insurance and banking.  We decided that religion was a great business to get into. It took little or no initial capital. If the religion caught on, it could provide significant economic returns. The number of paid employees was a small group that was well compensated. We came up with several religious concepts that might be winners, but they didn't get beyond the HMS Bounty's front door.

This topic came into my head because, in my upcoming novel "Death Behind the Pink Wall," four youth living in Santa Barbara, California, are radicalized by ISIS. Evie and Jamal are young lovers. Jamal has a Muslim father. His mother is an academic who was raised in Santa Barbara. The process involves religion. I've rewritten the following two segments numerous times. Do they seem real? My brain has a hard time getting into young people's heads. My forte is research, but I'm somewhat lost in interpreting the difference between what people write and what's actually in their heads. My research tells me radicalized ISIS recruits use emotion over logic to reach their decision.

"Neither of my parents were religious. Probably one of the things that contributed to their divorce."

Evie laughed as she continued, "I've attended some church services with friends, but it just seemed like a waste of time. Based on my experiences, I mentally ended up categorizing the services I attended into two extremes. There were those where some fucking guy would preach how bad a person you were and how you needed to repent for your sins." She held her hand out as if to accept something and finished with, "Please, pass the collection plate."

"At the other extreme were the services conducted by some guy with a big ego. Always with a booming voice that wants to show you how much he knows about the Bible and how important or dramatic he is. You need to be blessed by his God, or you will not go to heaven. I swear a couple of them acted like they were God. Once I thought I was at a Broadway performance, with a stage rather than an altar. The preacher was leading people in singing and role-playing.  He had men pushing wheel barrels down the aisles to collect the money."

Laughing, Jamal responded, "No. You're definitely not  religious, but I will say you have a way with words."

Evie reaches over and picks up the old Bible and randomly flips through some pages, then asks,  "Do Muslims believe in Jesus?"

"Kind of. He is mentioned in the Quran. But, it's like he's developed a cult that happens to have really caught on."

"You've heard my philosophy on religion.  I like your analogy between Jesus and a cult. I believe religion is just made up of a bunch of cults that happen to have caught on."

"Maybe. Maybe not. Everyone, at some point in their life, wonders how did things start. Therefore God."

"You can add me to the wanderers," replied Evia.

"I've been reading about a guy named Spinoza. He was a wanderer all the way back in the 1600s.  What he said about God is actually Islam, in my opinion.  Islam teaches that everything is created by Allah. Spinoza said that God is infinite, self-caused, a unique substance of the universe. Not something created or made up by man. Look here; it's on my website. 'There is only one substance in the universe; it is God, and everything else that is, is in God.' Apparently, he was kicked out of the Jewish religion for his beliefs."

Evie stood behind Jamal and leaned her head against his. "Jamal, your way beyond what my brain can contemplate." She looked at the computer screen. Jamal's website had Islamic prayers and sayings. Then Jamal scrolled down to his commentary. As he continues to scroll, there appeared alongside selfies of Jamal and his brother on the website. Then -

"What does that mean?"

"Allah is the Greatest. It's repeated four times. I think it's done to impress the importance of the prayers on you."

Yes, my crime novels are getting a little heavy. It seems to be the direction I am taking. I believe it makes for more interesting antagonists. Yes, I loved my college philosophy course.