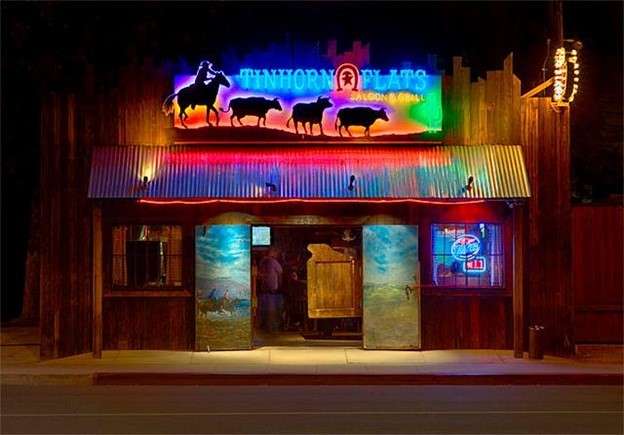 I love the month of March because of March Madness. Unfortunately, this weekend, both college basketball teams I follow, the UCLA Bruins and the Villanova Wildcats, lost important games. But I suspect they will be in the March Madness mix.

According to Webster, the definition of 'march' includes (1) "to move along steadily usually with a rhythmic stride and in step with others; (2) to move in a direct purposeful manner: PROCEED; and (3) to make steady progress: ADVANCE. I am hoping our country and government follow these definitions for the rest of this year.

The picture tied to this post is not part of an Old West movie set on the backlot of one of the studios here in Burbank, but rather a real saloon. Tinhorn Flats, not one of my regular watering holes, but who knows, I may give it a try as it's just a few blocks from me. That's assuming the saloon owners win the shootout draw. I suspect the duel will not be fought at 'high noon,' and I suspect a posse will intervene.

Here's the story. The owners of Tinhorn Flats have vowed to defy the ban on in-person dining. "Them is fighting words." So, the Burbank City Council voted unanimously to revoke the restaurant's permit. "Now that sounds like there will be a shootout." Despite the vote, or maybe because of it, Tinhorn Flats reopened the other day – at high noon.

In conjunction with the reopening, the owners posted this on Instagram – "This was nothing short of a vicious mob with pitchforks coming for those who stand against their campaign of fear. I WILL NOT COMPLY, AND I WILL NOT CLOSE MY BUSINESS TO THESE PATHETIC, UNAMERICAN SOCIALIST COWARDS. If need be, I will go down with my ship."

The Tinhorn Flats shootout is due to the pandemic and 'following the science' versus 'protecting the economy.' It also is partially the result of our Nations' shootout between the conservative, liberal, lives matter, et cetera tribes that have evolved in the past decade. In my novel SKYWARD, the Bowman Twins and their clique, or maybe tribe, are trying to escape the ugly Earthly problems by leaving town. They are moving to the Moon, with plans to move on to Mars. That's really leaving town.

Finally, this is a quote from the Editor's Letter in the March 5th issue of THE WEEK concerning Perseverance's journey to Mars. "The real question is whether in traveling to space we end up expanding our horizons or intensifying our narrow conflicts. Let's hope it's the former."

That is what my novel SKYWARD and its principal characters, the Bowman Twins is about.