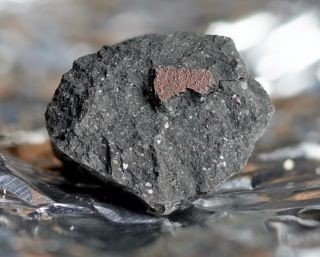 Prior to my initial research and writing my new novel SKYWARD, I'm not sure if I would have paid that much attention to an article about a meteorite crashing to Earth. My interest in space is now massive. Particularly as the news down here on Earth has been so depressing for the past year. The picture that accompanies this post is of the 300 grams fragment of a meteorite that landed in a driveway of the Cotswold town of Winchcombe, U.K., on Sunday, February 28th.

The black chunk of rock is a carbonaceous chondrite meteorite that contains a mixture of minerals and organic compounds, including the amino acid Building blocks of life. It includes the most primitive and pristine materials in the solar system. Before joining us here on Earth, it spent most of its time orbiting somewhere between Mars and Jupiter.

In SKYWARD, the Bowman Twins will be doing their best to avoid meteorites as they head to the Moon and then Mars. At the moment, I have it in my head that Bowman's space story will involve three novels. The first SKYWARD gets them to the Moon. The second novel will get them to Mars, and the third to Europa, one of Jupiter's moons. Europa is believed by NASA scientists to be far more likely to be habitable than Mars.

Here is the "new beginning" to my novel SKYWARD –

That expression did not apply to many Bowman family members, as they never left the house on the hill. It came with wealth and offered them safety, prestige, respect, and parties. Lots of high society parties. Then came the Millenium disrupter Bowman Twins, who gave a whole new meaning to the expression. "You can't go home again." They moved away from the way things were in a unique way and never looked back.

The house on the hill was the Bowman Mansion located on the top of a hill in San Francisco's plush Pacific Heights neighborhood. It exuded wealth. It was constructed by John Bowman, a Sooner from Oklahoma who built a fortune finding oil. His oil exploration eventually took him to California, where John fell in love with San Francisco. That's where he built the house on the hill that served generations of Bowman family members. Some Bowmans became encaptivated by it.

Competition for the Bowman Twins.

From CNN this morning – It was announced on March 9th that China and Russia have agreed to jointly construct a lunar space station. . . "China and Russia will use their accumulated experience in space science, research and development as well as the use of space equipment and space technology to jointly develop a road map for the construction of an international lunar scientific research station (ILRS)," China's space agency said. . . The lunar space station will be "a complex of experimental and research facilities" created on the Moon's surface and/or in orbit of the Moon, according to the Roscosmos statement. The facilities will be designed for a range of multidisciplinary research, including "testing technologies with the possibility of long-term unmanned operation with the prospect of human presence on the moon."

In my March 3rd post, I introduced you to THE AGRICULTURAL COMPLEX that provides food to the Bowman Colony on the Moon. Adjacent to that complex is the Canteen Building, where the colonists are fed. It's interesting to note that John Glenn, America's first man to eat anything in space, found the task of eating relatively easy, but found the menu limited. Later, the Gemini astronauts had food choices that included shrimp cocktails, chicken and vegetables, butterscotch pudding, and applesauce. So meals on the Moon are not that much different than breakfast, lunch, or dinner on Earth.

In designing the Bowman Colony, it was decided not to waste space by providing each living area with a separate kitchen. Instead, an apartment had a mini-kitchen. It was equipped with a microwave, a small under-the-counter refrigerator similar to those in a hotel, and a K-cup coffee maker. Full meals are provided by the Canteen Building. The Building is divided into three parts. There is a commercial kitchen that prepares all meals. The cafeteria is where most meals are served cafeteria-style. Or a meal can be placed in a picnic box to be taken back to the individuals' apartment.

Lastly, there is the fine dining room, where a limited number of gourmet meals are served each evening. During the year, everyone in the colony is allocated their spots in the fine dining room. Like on a cruise ship, there are multiple sitting for each meal. MAX, the colony's master computer, schedules all of the meals for each Bowman Colonist. If you don't like a planned life, the Bowman Colony is not for you.