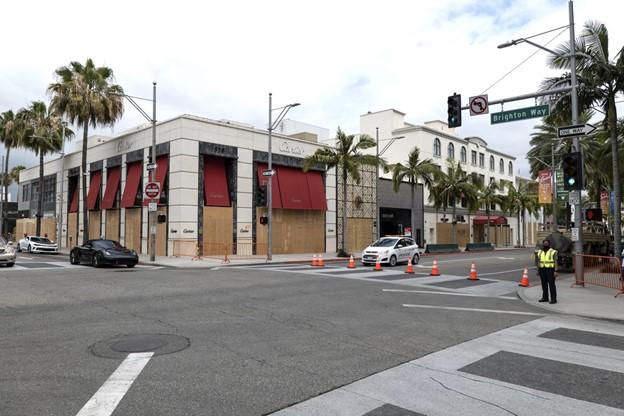 I watched the election news until 1AM and woke up to the Los Angeles Times front-page telling me, "Still Counting."

What will I remember about this presidential election? Boarded-up storefronts. The picture included in this post is of a boarded-up street in Beverly Hills. It startled me. As my first job after completion of my tour with the U.S. Army Finance Corps was with People Thrift and Finance, located just a block away from this location. I remember how peaceful those days were.

This was not a normal election compared to any other I have experienced. Hopefully, it has not set a standard for our future elections. One thing that has become normal in our elections is that the pollsters got it wrong again. To Pelosi's surprise, there was no "Blue Wave." In fact, if anything, the election confirmed that our country is divided down the middle. Also, it indicated spending millions upon millions of dollars on political ads as the Democrats did was wasted. It had no apparent impact on the election.

You know from my previous posts I have problems with how the Postal Service is currently being run. From today LA Times – "The Postal Service said in a court filing that nearly 300,000 ballots had been scanned into the U.S. mail system since October 24, 2002, but had not been scanned again to show they had been delivered." WHAT HAPPENED TO THEM???

I'm a Gemini, and here's todays' horoscope from the LA Times – "You've taken the time to think about the right words to describe what you offer the world, and today people will want to listen and reward you." – I can only hope so.

As respects my words. Many of you know I have been battling with Facebook over my posting for my FBI Special Agent Hartmann Series. I spent three hours yesterday texting and talking with their reps about why they have censored me. Still have no answers, but they promised to get back in 24 to 48 hours by email. The same response I have received from them before. If the email is like the others they have sent, it would advise me to start my protest process again.

To take your mind off the election, you should read a good book. My FBI Special Agent Hartmann novels are suggested. A Booklife review indicates, "Rupp's extensive world travel shines on the page. The truly varied assortment of settings includes Berlin, Monaco, and North Carolina. As each new locale is described, readers will find it easy to picture the characters there."